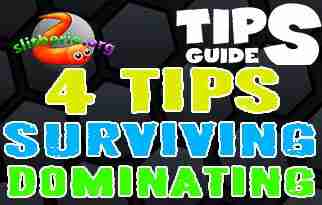 Slither.IO is the newest sensation to hit the internet and people literally can’t stop playing this simple browser game. You start out as a tiny worm-like character and the point of the game is to swallow balls of light in order to grow. The bigger you get, the more in demand you are and the bigger target you are. People in the game die by running into another worm/snake. There’s a leaderboard and people are constantly trying to top it. It’s a friendly sort of competition—but with a terrible dark side. So here’s four extremely helpful tips for becoming a master in Slither.IO.

There’s a reason the browser game provides you with a very helpful map at the bottom of your screen. One of the things I have learned is find the places on the map where not a lot of people are hanging out. Then you’re free to cruise around without worry and eating the balls of light as you please. This way, you can grow the “snake” on your own time and not have to worry about running into someone due to overcrowding. But do be aware that sometimes people come here to hunt out those who are hiding.

Once you’ve gotten a good length, you now have the power of encircling the enemy. This is probably one of the biggest dick moves in the entire game, but it’s also one of the most effective tactics. Once you encircle your enemy, they won’t have anywhere to go and they’ll have no choice but to run into you and die, thus leaving behind all of their balls of light for you to devour.

You’ll find that the competition is fierce in Slither.IO. Sometimes when you’re going after a big enemy and trying to encircle him, chances are he’ll catch on pretty quickly and try ramming you into the wall. While doing this doesn’t have the victim leaving behind their balls of light, it does kill them. This causes them to start all over. So while there’s no reward for killing your enemy, you at least get rid of the threat. But then they might just come back, out for blood.

If you hold down the mouse button, your worm/snake increases its speed. You have to be extremely careful when you do this. You could find yourself speeding right into the belly of another worm/snake. But sometimes, the speed can be used to get you ahead of the competition. If you’re ever racing against another important to try to dodge in front of him and cut him off, having more speed will help you achieve this goal. Cutting offopponents is a good way to kill an enemy, but most experienced players will know exactly what you are trying to do and will dodge accordingly. But be careful because when you use your speed, it will slowly decrease your size.

How to Deal with Slither.io Lag

How to easily unlock Slither.io Skins