As you already know slither.io game is among the most downloaded and played application on mobile devices as well as the computers. The developers of Agar.io keep developing same kind of games with a great pace. In this article we will provide a deep look to the gameplay of slither.io and provide some tips to grow faster in slither.io.

Firstly you need to know that you start to slither.io as a small snake. You can grow bigger by eating the small and glowing orbs on the map. 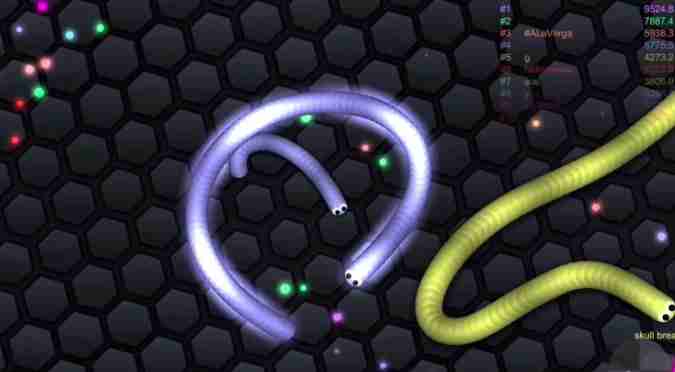 However the important thing is to grow faster by eating the remainings of the bigger snakes in Slither.io. The logic of slither.io is to get bigger without hitting to any other snake. If the head of your snake will hit to another snake you will be eliminated and lose. You can cut the front of the other snakes by following them or ambush other players by speeding up your snake by holding the left button of your mouse. In this way you will be able to grow faster in Slither.io.

Speeding up with your snake will also make you lose some parts of your snake. This is why you need to follow the other snake which you are trying to ambush good. Otherwise if you fail to ambush that snake you may experience some loss in general.

In the event that you are willing to have some helpful tools which can provide you some advantage while playing then you can prefer the slither.io mods. Our slither.io mod provides many advantages such as zoom in and zoom out options, a map which shows your current location, nickname save, free slither.io skins and a lot more features which can double your fun. You can download the sliter.io mod from our website and start playing slither.io.