Grow Bigger to Survive in Slither.io

How to Survive to Be Greatest in Slither.io

The audience which mobile games appeal is quite large. Since smart devices are now being used by every age ranging from 7 to 77 some of the games can appeal to both young and elderly players. Those games which can manage to appeal all ages become trendy too quickly. Slither.io game is one of those games which is the most popular one.

First of all it will be useful to let you know that slither.io is an online web broser based game where you play against other real people. This means that it is not possible to play slither.io without an internet connection. However it will be worth to note that slither.io game does not use too much data. You will have to type a nickname before you play slither.io and then you can begin to your advanture after you click on the play button. Slither.io game has a quite simple logic to play it. Players control the snakes where their nicknames are written on them and try to earn scores by collecting the glowing orbs on the map however whenever someone will be eliminated that player’s score will be left on the map as glowing orbs and you are able to collect them. You can eliminate other players by forcing them to hit their head to any snake.

The main logic of slither.io game is to force other players who already have many scores in order to collect their remainings so that you can easily grow faster in slither.io. Other snakes that are being controlled by the other online players can prepare traps to us or we can do the same thing for them in order to get their scores. In this way slither.io game becomes one of the greatest games of all time which is fun to play. 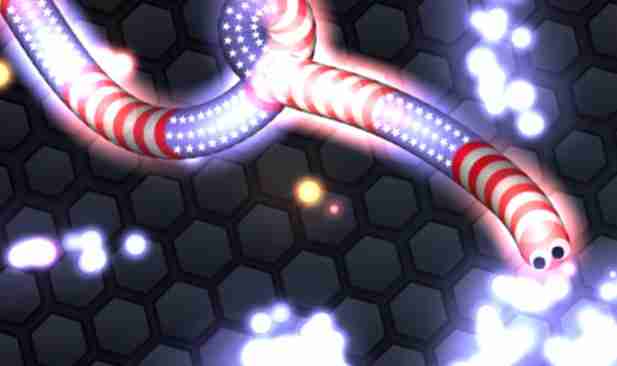 The goal in slither.io is to grow as much as you can until you rank number one on the leaderboard that is located on the right top of the screen. However it is not that much easy as you imagined. It will be quite hard to rank even in the top 10 by only collecting the glowing orbs on the slither.io map. Therefore you will have to chase the other snakes in slither.io after you reach to certain sizes.

However growing in size does not provide a solution to your problems. You speed will be slowed down as you grow faster. You can still speed up by holding down the left button of the mouse but this can be performed by anyone who has more than 10 cells. When you speed up you will lose some of your points and size until ten cells left. You can see the amount of your cells from the left bottom of the screen. Althoug slither.io may look boring to some of the people at the first glance, they will change their mind in the first time they will play slither.io. As you can play slither.io through your browser it is still possible to download slither.io to your mobile phones through the application markets.

Slither.io also provide you the oppurtunity to customize your snakes with the help of the slither.io skins and you can unlock all of these skins for free by installing the slither.io mods where you can find them on our website. Slither.io mods also offer variety of features such as nickname skin option and zoom in or out options which allow you to have a wider view on the slither.io map.