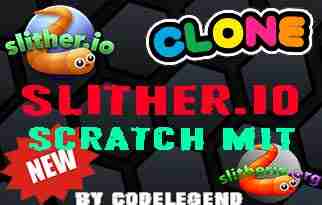 I’ve tried my best to recreate both the graphics and controls of the original slither.io. However, multiplayer gaming of this magnitude would be quite difficult, so I had to come up with a new game to play!

-Slither follows your mouse
-Eat dots to grow
-Click and hold to speed (for a price)
Get the biggest (snake? worm?) in the time limit!

Obviously credit for the background and concept goes to the original creators of slither.io – whomever they are. I used Inkscape to import the background larger than 480×360. All programming is mine except for a modified script that converted HSL colors to RGB. I probably got it from @TheLogFather.

Why I won’t be making it multiplayer: (UPDATE: @griffpatch did it)

-Without a time limit, snakes can easily reach lengths exceeding 300. That’s 600 numbers to encrypt into a cloud variable and decrypt at the other end.

-A workaround to this would be to just send the location of the head, and have other computers simulate all snakes. This would work visually, but any slight lags in the cloud could offset snakes drastically. Plus this would take a lot of extra processing power.

-Speaking of processing power, this project is already starting to lag with only one snake being drawn! I’ve even optimized it so that offscreen portions aren’t rendered. It just doesn’t seem possible to render any more snakes.

-All those dots! Sure, we could make it so that dots are stored locally and everyone’s dots are in different positions, but this kind of defeats the purpose of the game when death dots come into play. There are just too many of them to synchronize them across computers.

-Cloud speed – In a realistically achievable multiplayer system, all snakes but your own would lag behind quite a bit. This could be very problematic when you’re checking collisions. If two snakes reached the same place at the same time, each one would claim that it got there first. Neither would die, and they would go through each other! Or if it were coded the other way around, both snakes would die.