Today we will introduce one of the best slither.io mods available on the internet with you which was developed by the ABC. You can find every single feature you are looking for in slither.io through this awesome mod which we believe it is the best. So there is no need to waste time, let’s start to the slither.io mod review.

First of all this slither.io mod has the best bot we have ever seen, We already reached to 5k points by only writing this much in this article. It is possible to turn on and off the slither.io bot by pressing the T button on your keyboard. The bot detect everything around you and moves accordingly. It is possible to change the radius of the bot by pressing the A and S buttons. S will be decreasing the diameter of the circle while the A will increase it. This is useful for your bot in order to detect possible dangers to not be eliminated.

In the event that you are experiencing slither.io lag problems than you can press the O button in order to turn on the mobile rendering which will increase the performance of your computer and stop the lag problems. You can turn on your bot and leave your computer by pressing the I button, in this way whenever you will be eliminated the game will restart automatically. You can also turn of the radius on your head the bot uses by pressing the Y button. The slither.io bot will continue to use it but you will not see the circles around you head. It is possible to turn on and off the log debugging by pressing the U button. 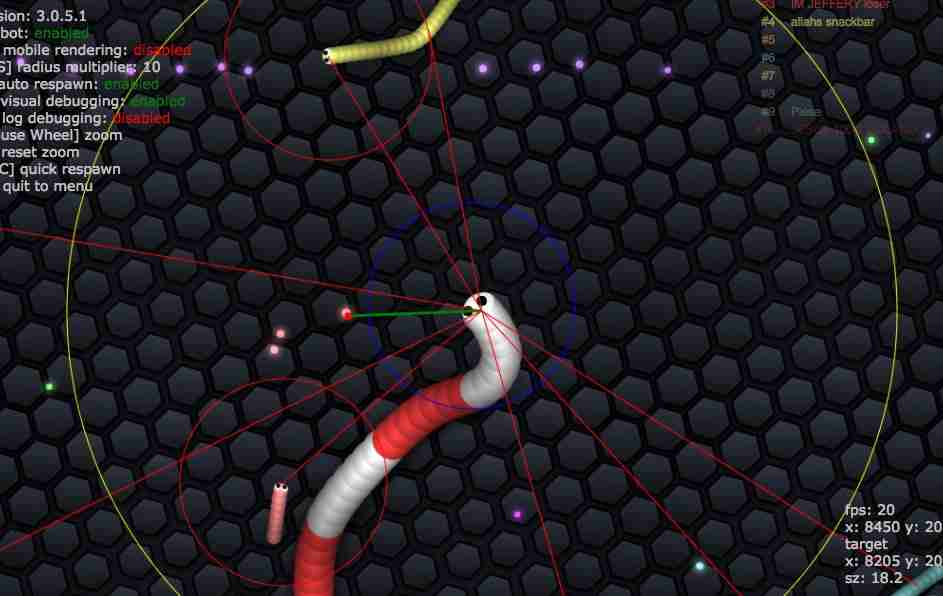 In the event that you didn’t like the place you start on the map than you can simply press the ESC button on your keyboard to respawn in the other parts of the map randomly and you can quit to the main page by hitting the Q button on the keyboard. You can use the slither.io zoom hack with the help of your mouse wheel and reset the changes you did by pressing the Z button whenever you want. The map is located on the right bottom of the screen together with your real time coordinates and target’s information.

There will be a counter as well as the settings menu at the left side of the screen. The counter counts your best points as well as the games played with this slither.io mod in that session. We believe that this is one of the best slither.io mods developed yet and you can take the advantage of this slither.io mod by checking the buttom in order to learn how to install and download it. Let us know if you will encounter any problems by leaving us a comment so that we can do our best in order help you.