Here are the Top Tactics for Slither.io

Slither.io launched after the success of Agar.io and managed to be mmore successful than it even it has almost same mechanics with agar.io. I used to play slither.io at work at the beginning and then become addicted to it so I began producing several tactics in order to grow faster and not to be eliminated. These tactics let my game to be longer and more fun. In fact I didn’t named these tactics but I will try to give them a title while I will be writing this article. Please note that you can play slither.io through this website now!

This tactic is all about freeloading. We begin to game in the smallest size and that is why we do not have anything to lose so that we need to go right to the middle of the map for the freeloading. Since there are bigger players at the middle and someone will be eliminated too soon, the chaos will arise. Players are competing with each other to collect as much as remainings they can so that they usually make mistakes which results with more eliminated players. In the event that you will not speed up in slither.io and play in a controlled manner you can collect many score in this chaos. I even ranked number four once by just collecting these remainings at the middle of the map. You can grow faster in here with this tactic too.

Thanks to this tactic your opponents will believe that the control is in their hands however it will not. We will allow them to get the most of the remainings so that he will be pleased however meanwhile we will be preparing our trap for them. He will hurry to collect as much as he can while we are setting our trap in slither.io. You need to speed up while he was trying to get the last remainings and cut his way with your body in this way he will be more likely to hit you and you will be collect the remainings of his plus the remainings he collected. 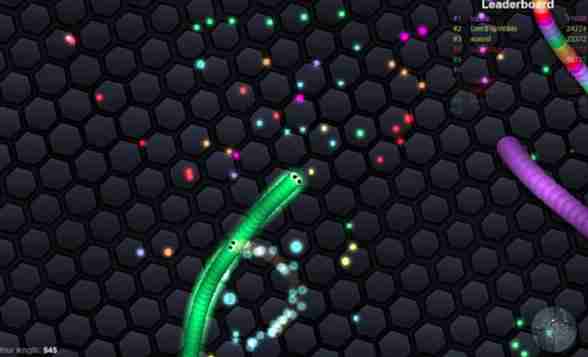 In fact I am not sure whether you need to adopt this tactic or not since you will find another detailed tactic which is more easy to do in the following but let me write it down again. Some of your opponents play very aggressive and try to draw a circle around you in slither.io game. In these times start chasing his tail so that after a while you guys will be chasing each other. In the event that you will play careful and find a remaining and start to collect them your tail will stop in its place and your opponent will hit to your tail. In this way you will be able to collect his remainings in a line.

Indeed we always encounter such people who always try to take the advantage of everything. They will come closer to your head in a parallel way and will try to cut your way. In the event that your opponent is not worth to deal with then turn around and go back however if you believe that he will be good to eliminate find another player on the map and try to go through that snake. In this way your opponent who is chasing you will be stuck in both of you so that he will be eliminated.

Drawing a circle around your opponents is one of the main tactics that is preferred by almost every slither.io player. DO not waste your time with small snakes to trap them since this tactic is risky. Any snake who is trying to cage his opponent will cover less space than normal. Try to locate such players and draw a circle around them. In this way you will earn more points in a short period of time in slither.io game.