Some Tips & Tricks for Slither.io

I would like to share my personal tips and tricks about annoying slither.io game (from time to time). The only thing that you need to pay attention while playing slither.io which is the continuation of agar.io in terms of the popularity is to avoid placing any goods which will break around yourself while playing. Apart from this, in fact there are not much things to pay attention. In the event that you will play slither.io in a logical sense and slow you can grow faster in a short period of time and have more fun in slither.io.

There are some bots in slither.io just like agar.io and you can eliminate and collect the points of these bots with clever moves. If you need some tactics for slither.io try to be patient and calm. Once you will play calm you will realize that you can already grow bigger quickly. Try not to speed up unncessarily in slither.io game.

If you believe that you are in danger than go to a calm area and focus on game so that you can trap your opponents. Below, you will find some of my personal tactics that I developed by playing slither.io. We can sort the things you need to pay attention to as follows; 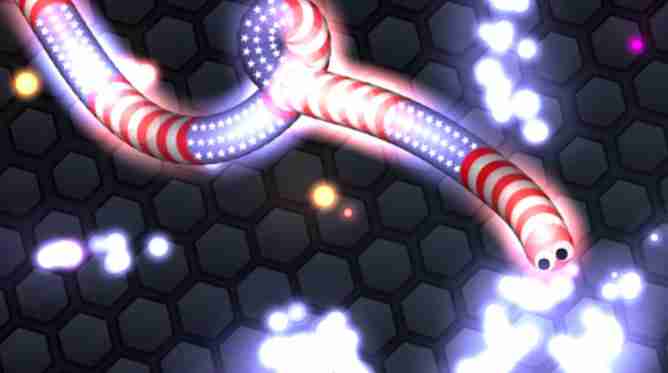 Rather than collecting the glowing orbs in order to grow go to the middle of the map and try to collect the remainings of the eliminated bigger snakes, in this way you will grow faster and bigger.

Usually the middle of the map is crowded and most of the players give up quickly due to the lags they experience or due to the too much excitement. Thus, they hit to any snake and be eliminated. You can always collect these by slithering on them so that you can grow faster.

Be calm and try not to panic at any time. It may be stressful and stress will only cause you to be eliminated.

Once you find a snake which is smaller than you but worth to eliminate, draw a circle around it and cage it. Let him be eliminated and collect the orbs safely.

Rather than playing slither.io at the edges of the map, play in the middle, this will help you to grow faster.

As I mentioned above never ever panic. Although slither.io may be annoying from time to time, in fact it is too fun and you can grow fast.

Bots are available in game from time to time and you can also use some slither.io hacks through slither.io mods. You can find more information about these through our website, download them and enjoy more!