In this article we will be providing some slither.io strategies about the game which is considered as the evolution of browsed based game phonemeon agar.io. There is no one left in the world which never heard the agar.io and slither.io is the new generation game and accepted as the continuation of agar.io. Let’s see what is slither.io, how to play slither.io, and are there any slither.io hacks together.

You can play slither.io through our website by simply creating a nickname on the home page of slither.io. Everyone begins the game with having fixed calls and you can see the number of your cells from the left bottom of the screen. You can find the scoreboard on the right top and map on the right bottom just as in agar.io.

You already know agar.io where we are a ball and try to eat the foods on the map or other players in order to play. Slither.io is a little bit both similar and different. The gameplay of slither.io is same with agar.io and you give direction to your snake with the help of your mouse in order to collect the foods. However you are not able to eat the smaller players like agar.io and even the bigger ones. The goal in slither.io is to grow as much as you can without hitting to anyone else just like the old snake game in Nokia phones.

You have to use your mouse in order to move. You cannot split just like in agar.io however you have the chance to speed up. All you have to do is click and hold the left button of your mouse in order to speed up but you will lose some of your cells in slither.io game when you speed up. This means that you will have 10 fixed cells as you used to have when you started to play slither.io in the event that you will go fast all the time. 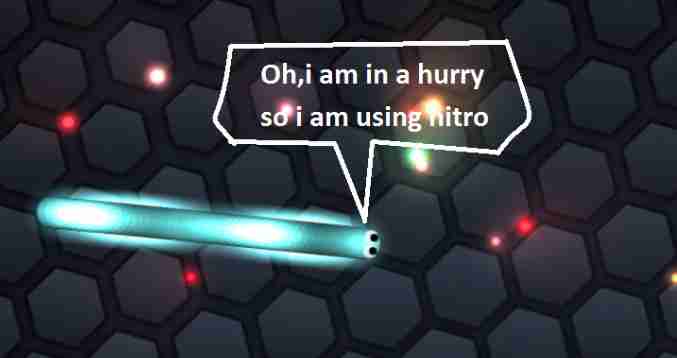 Always avoid from those who curled to their sides, try to get bigger is size as much as you can. However these advanced slither.io strategies will help you to become number one on the score board.

Since we are not able to eat other snakes on slither.io game and we will be eliminated whenever we hit to any smaller or bigger snake, we have to pay full attention while playing slither.io in order to be successful.

Follow the opponents from their back and tail. In this way as soon as they will be eliminated you will have a better position to collect their remainings in order to grow faster in slither.io.

While other players are moving straight, speed up in parallel with them. This can be considered as a trap because your cells will be left behind you while you are speeding up and other players will be trying to collect them and you can make a maneuver in order to take them all in a circle where you can cage them.

In the event that you are bigger then apply the drawing a circle strategy on bigger snakes. When you are smaller try to speed up and cut the way of the bigger snakes in order to eliminate them.