As usual you turn on and off your slither.io bot by pressing the T button while you are playing slither.io. As far as he tells, he developed the artificial intelligence of his bot and as a result of our tests we couldn’t see any difference since we think that the previous one was perfect too but if he say so, he obviously did. You use the Y and U buttons to turn on and off the visual and log debugging. Again it will be in your favor to turn on the visual debugging in order to see any possible dangers. You can increase or decrease this radius by using the collision radius multiplier. A button will increase the size while S button will reduce it. As you grow bigger you will have to increase this multiplier since your turn will take longer when you are bigger.

In the event that you will press I button and turn on the auto respawning feature then you will start again immediately whenever you will be eliminated. You can turn on the collision detection by clicking the C button while playing. This will warn you with large red dots when you are in danger. In this way you will be able to realize the possible dangers in advance and take precautions. 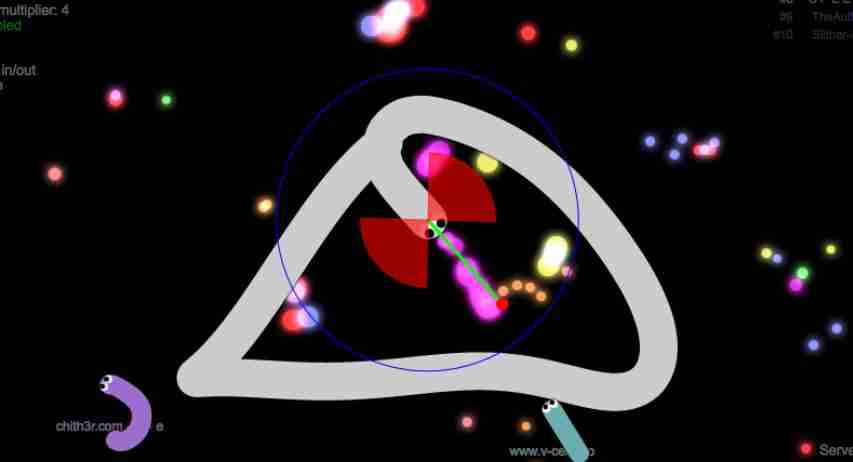 If you will turn on the prey hunting feature by pressing the P button for once, your snake will directly go and get the moving orbs which provide extra length to your snake. We highly recommend you to turn it on until you grow in size since it will reduce the time you will grow. You may want to pause slither.io mod however since it is an online game it wont be possible. In these time in the event that you will press the D button your snake will start to draw circles around itself. It works for a short period of time however other opponents who will see that you are away from the keyboard will directly attack you and cage you with their bodies.

You can use the ESC button of your keyboard to reset your snake and start from the beginning at the different part of the map and you can use Q button to quit to main page. You can use the slither.io zoom hack in this slither.io mod again and you are able to reset the changes you made in slither.io game by pressing the Z however keep in mind that this only works for the zoom setting.

He announced that it is possible to change the skin of your snake while playing by pressing the X button but as of today he didn’t add this feature yet. In fact you will be playing with a white slither.io skin. We guess there is a problem with the coding which he didn’t realized yet. However once he will realize it, it will only take few minutes to fix this and you will be able to change your skin as you wish while playing this slither.io mod. You can also turn on the auto skin rotator by clicking on the W button. Let  us know what do you think about this slither.io mod after you play by leaving a comment to us.