How to Grow Fast in Slither.io

Slither.io hack is the new game which is in the same style with agar.io and it is much more fun when it is compared with agar.io. Would you like to be the number one in slither.io by playing for a very short time? Then you should adopt these slither.io strategies which we will share with you in this article. Although slither.io looks like a very simple snake them that we used to play in the past, you may be eliminated even by small worms while you are trying to be number one if you do not pay the enough attention. Of course no one would like to experience this and start from the beginning. You have to be very careful in order to not experience such things.

Firstly when you start slither.io you will see a page where you have to write your nickname. Before it click on the skins section which is on the left bottom of the screen and determine the slither.io skin you are willin to play with. Then type your nickname and start playing slither.io as a small worm. Try not to be the food of other snakes in slither.io. 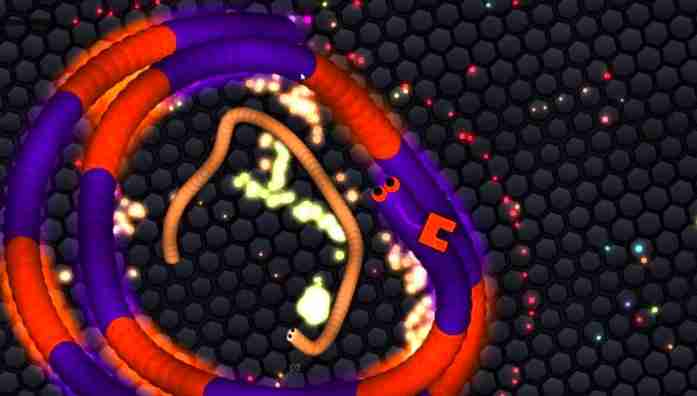 Never allow other snakes to draw a circle around you and cage you with their bodies. If they will do it, you will have no place to go and will be eliminated. However if you will be patient enough and play well you still have the chance to eliminate the snake that surrounded you with its body. You can grow faster in slither.io by collecting the remainings of the other players.

Whenever you grow enough try not to move too fast because you may lose your control and since smaller worms are faster than you then can cut your way and eliminate you. Keep in mind that the middle of the map is always crowded and most of the players are eliminated in here which means you have high risk to be eliminated as well as high chance to grow faster in slither.io.

Always try to cage other smaller snakes by drawing a circle around them. However be quite careful since some of the players play very aggressive and can eliminate you with their quickness. Let us know if you have ay other further slither.io strategies or slither.io hacks which help you to grow fast.